Making you feel what we feel. The Freedom Theatre in Jenin

Jenin is a small town in the north of the West Bank. Until recently, the town was primarily known for its violent history as a stronghold of armed resistance during the second intifada. In 2002, an Israeli demolition campaign almost entirely destroyed the refugee camp, killing many of its inhabitants. Since then, Jenin has become the heart of a different kind of resistance – one that uses art and culture as its weapons. In the middle of the refugee camp, next to posters of deceased fighters posing with Kalashnikovs, a colorful mural with messages of hope and peace marks the entrance of The Freedom Theatre. Beneath it, children play football and a group of visitors from France and Germany drink coffee and chat with the theatre staff. They are continuing the legacy of Jewish-Palestinian Juliano Mer Khamis who founded The Freedom Theatre in 2006 and sparked the idea of a ‘cultural resistance’. In 2011, Mer Khamis was killed by a masked gunman just outside the theatre. Nabeel Al-Raee had been involved in the theatre from its beginning and is now its artistic director. I spoke with him and Micaela Miranda, director of the theatre school, about the role of art and theatre in politics and its importance for social change.

Verena Straub: Juliano Mer Khamis talked about The Freedom Theatre as a way of ‘cultural resistance’ or ‘cultural intifada’. What do these terms mean to you?

Nabeel Al-Raee: The idea of a cultural resistance has been under experimentation during the last ten years for us. Its meaning is constantly evolving as we go. On a basic level, we believe that art can be a way of reshaping and restructuring the Palestinian struggle. Our aim is to open a debate about the political, cultural and social situation in Palestine today, about our problems and challenges. We want to take new initiatives and look for different, non-violent kinds of solutions to oppose the oppression.

VS: What levels of oppression do you want to address? Where does your resistance start?

Al-Raee: The main focus of our resistance is the individual. We want to invest in the freedom of the individual – and this does not only mean freedom in a geographical sense, but freedom of choice, freedom of decision. Investing in the individual, in his or her ability for critical thinking, is also investing in a positive change for our society at large.

Micaela Miranda: Our way of resistance constantly moves between theory and practice. On our annual Freedom Ride throughout the West Bank, we invite people to share their personal stories and thoughts with us. On stage, we try to put this into action. Our play “Return to Palestine” [directed by Micaela Miranda], for example, was created after such extensive story-gathering. But then we constantly go back to theory to critically reflect what we do on stage. Also, each performance is followed by discussions with the audience. Often the question is: what can we do? What is next? We hear voices of hope, voices without hope, different political opinions etc. And in the space between we want to nurture a culture of critical thinking. 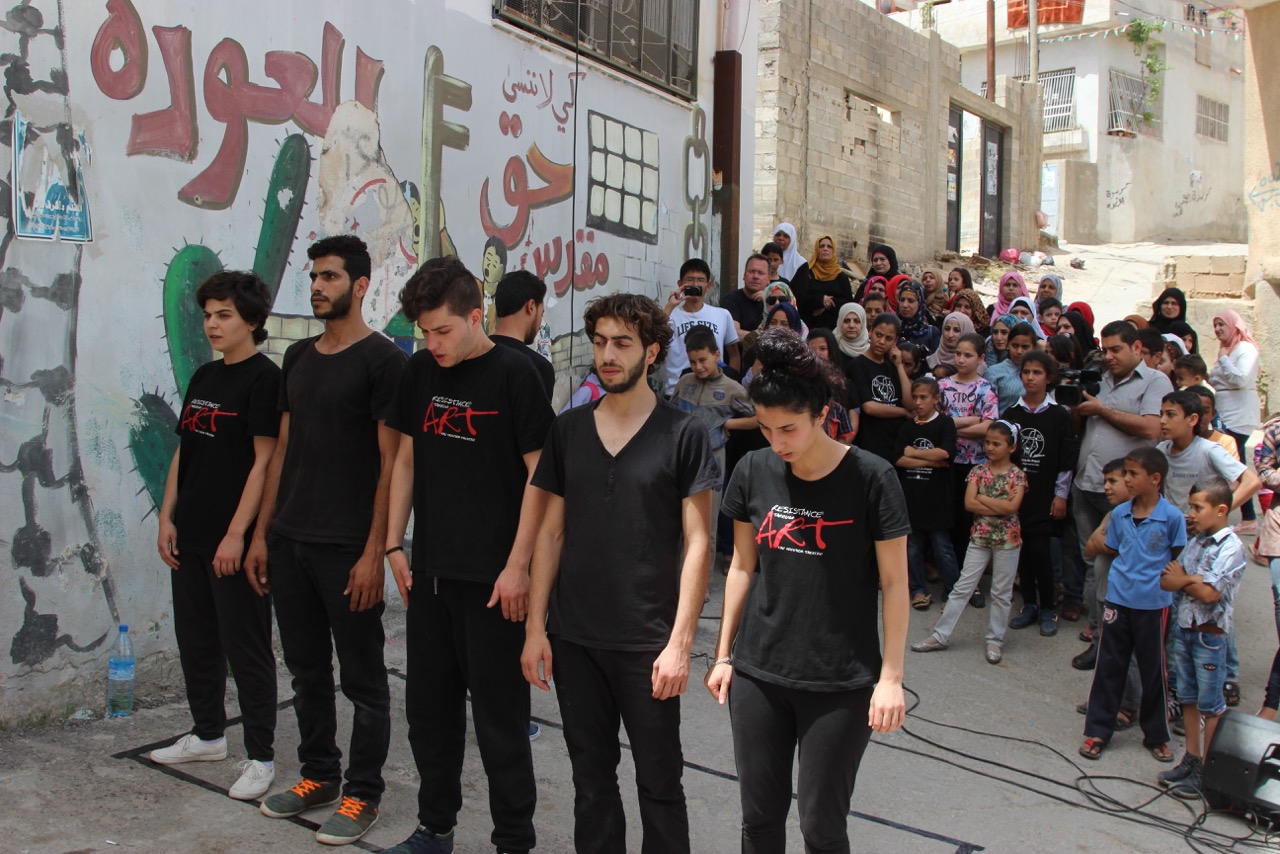 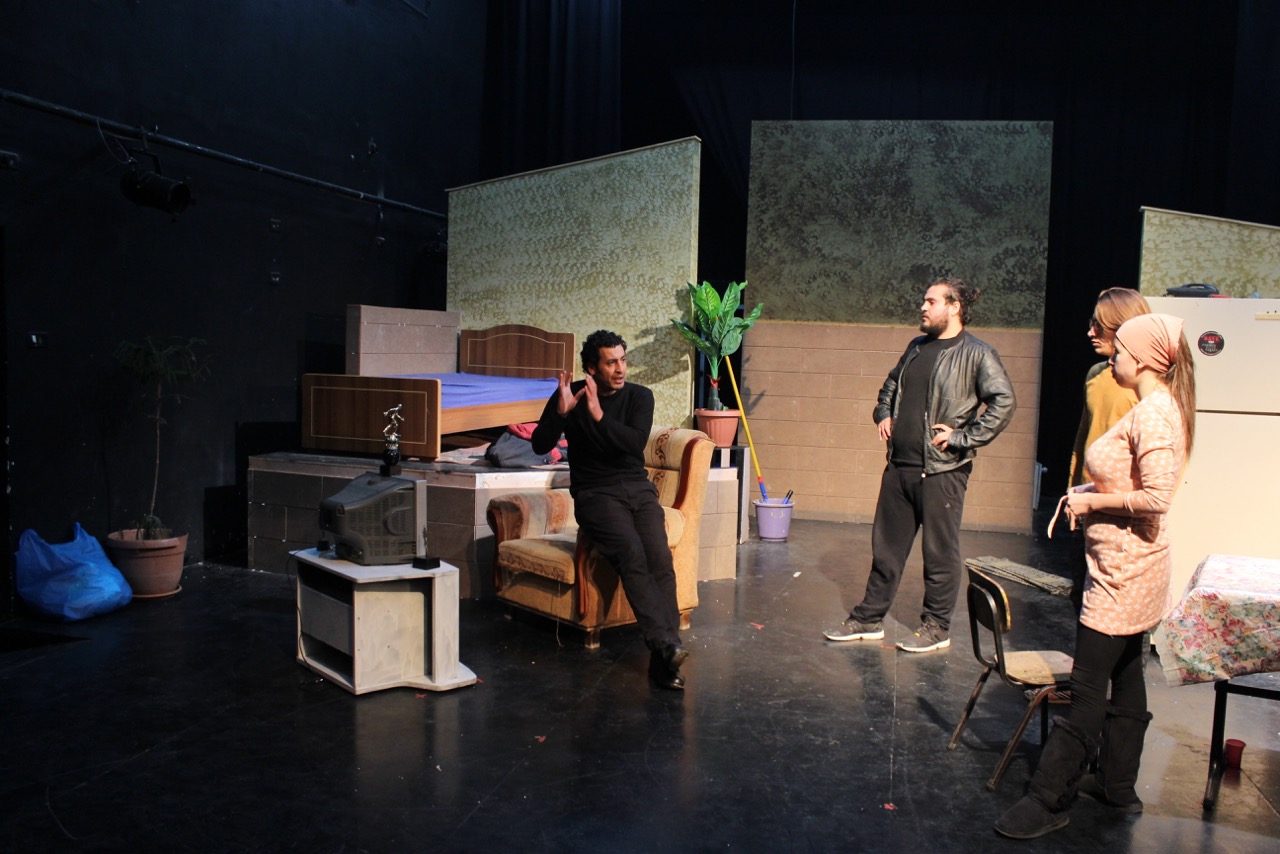 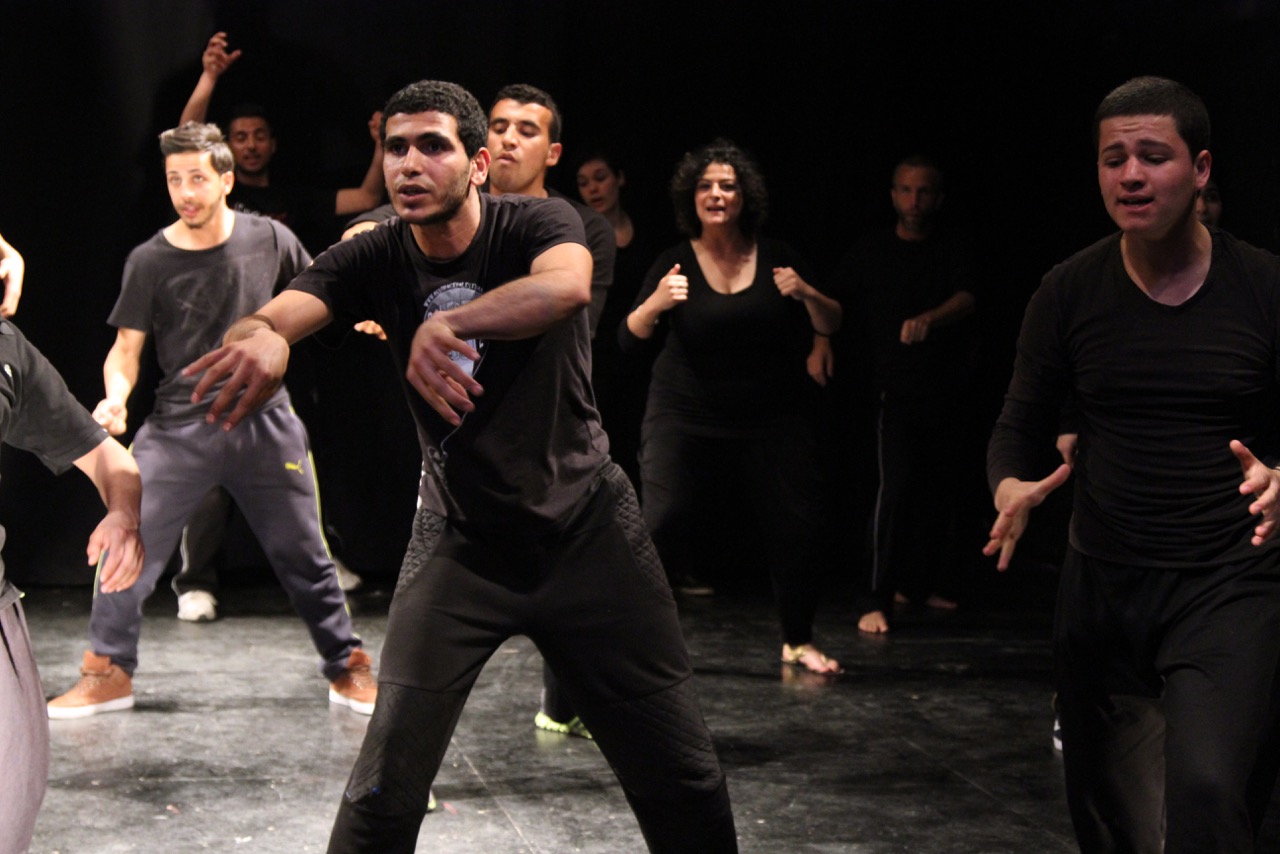 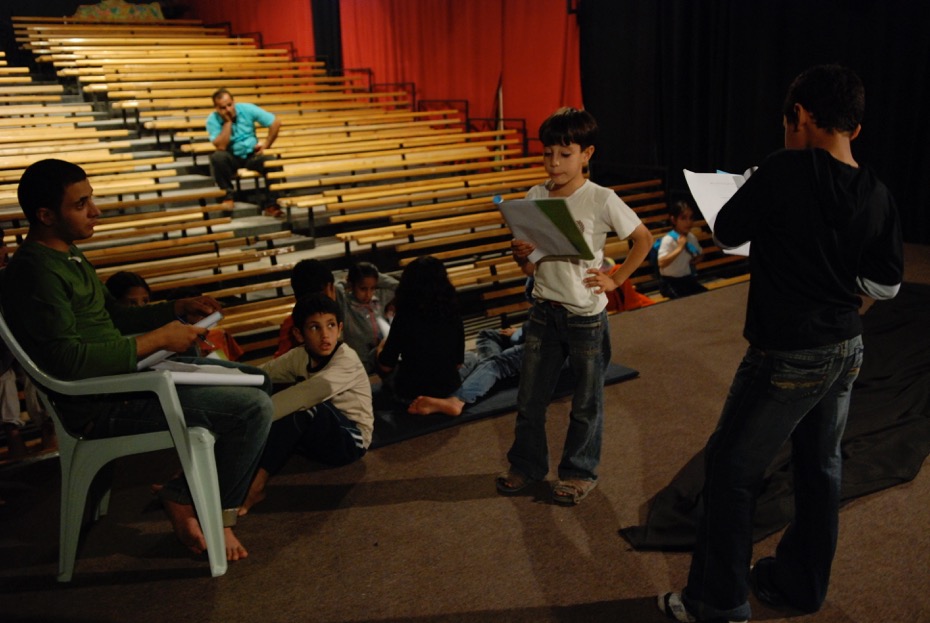 VS: The Freedom Theatre is the first drama school in Palestine – located in the middle of a refugee camp known for its violent history. The traumatizing experiences of oppression, destruction, and death must have left a strong mark on the local community. When you talk about your social engagement and about investing in the individual: do you consider your work also as a form of therapy?

Al-Raee: In some respects, definitely. When we opened the theatre in 2006, we even decided to bring a drama therapist into the picture. But, honestly, this didn’t work. Because many people in Jenin don’t want to believe that they are traumatized, even though they are. Then we realized that we could address all these issues through our normal theatre training alone, without forcing the idea of ‘therapy’. Ever since we have been experimenting with different formats and exercises in order to deal with the individual situations, conditions and feelings of our actors. But therapy is just a consequence of what we do – since we are not really focused on the healing of actual wounds but rather on their transformation into a more just reality. We believe that by doing theatre you will go through a process of therapy without really focusing on the fact that you “should be healed”. This has to do with the fact that we are constantly fighting the victimization of Palestinians insofar that our deep belief is that only Palestinians can free themselves.

VS: Many of your plays recount actual political events that happened in Palestine. Are reenactments like these a way for you to deal with the present?

Al-Raee: Yes, sometimes we feel a specific historic event needs to be brought back. “The Siege” [directed by Nabeel Al-Raee and Zoe Lafferty] is an example for that. The play recounts the story of a group of fighters who took refuge in the Church of the Nativity in Bethlehem during the height of the second intifada. The siege happened in 2002, but its effects can be felt until today. After the siege ended, the fighters were sent into exile with the promise to return after two years. But now we’re entering the 15th year after they were sent into exile  – and they never came back. The story is still alive and unresolved. We wanted to bring it back so that people don’t forget. 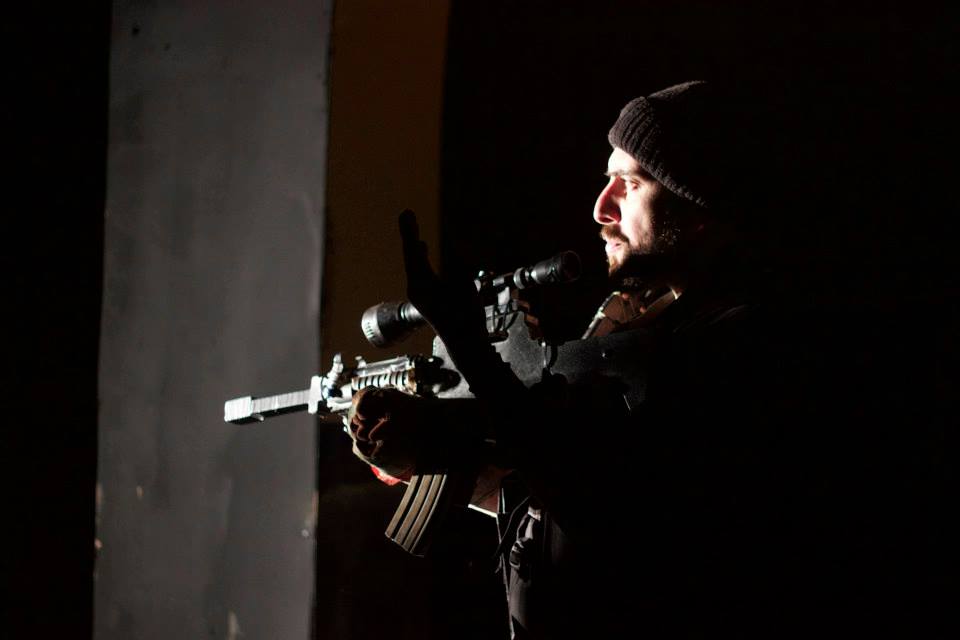 VS: Compared to other theatres in Europe, The Freedom Theatre works under extremely difficult conditions. Do you feel theatre has a different purpose, a different urgency here than, let’s say, theatre in Berlin?

Al-Raee: I don’t want to judge or generalize the situation of theatre around the world, but in most places it is a middleclass thing, people wanting to be entertained. We see theatre as a need, as a necessity, not as an accessory. It is not entertainment. Our audience from the refugee camp is emotionally very much involved because they are part of the stories. They see: This is happening with me, it’s happening with my society. Even when we perform plays like “Animal Farm” we can’t do it without addressing the political and social environment around us. It wouldn’t make sense for us to say that we’re doing theatre for the sake of theatre. There’s nothing wrong with that. But for us the question is rather: how does the play speak to our situation?

VS: But most of your plays also tour internationally and are received in entirely different political, social, and emotional frameworks. How do the reactions of international audiences differ compared to audiences in Jenin? And how does that affect your work?

Miranda: Sometimes we feel like having two brains: one brain is for the audience here, the other brain is for the international audience. As Nabil said, our Palestinian audience expects theatre to hold a message, they want to talk about their reality, their personal situation. This, of course, is different when we perform internationally. Often we feel that the idea of The Freedom Theatre alone affects people abroad. There were moments when we entered the stage and even before anything happened people started clapping. And first you think: How can you clap before you see anything? But then you realize it’s because people want to express their solidarity. So, the underlying message of all our plays is about humanity. About the feeling of connectedness and sameness: Palestinians, like any other human beings, have artistic, aesthetic and creative needs. It’s also a message about dignity.

Al-Raee: We are often asked by international audiences: is this really what’s happening on the ground? If they hear that the answer is yes, it often comes as a shock for them. An emotional shock. Because if you don’t experience everyday life here in Palestine, if you don’t go through the different levels of oppression – the checkpoints, the arrests, the omnipresence of death – it is very difficult to understand the amount of pressure that exists here.

VS: Does that mean, theatre is also a way of witnessing for you?

Al-Raee: Yes, that’s a good way to phrase it. Because what we really do is share stories. We go to the places where these stories are alive, turn them into theatre forms and share them, first in the West Bank and then internationally. In this way, yes, we witness. And we want our audience to witness, too. We want to open ways for them to understand and to make them feel what we feel. And if people listen to these stories, I think they also share a certain responsibility, in one way or another.

More about The Freedom Theatre