Reaching Out: Screening a War Crimes Trial in Northern Uganda 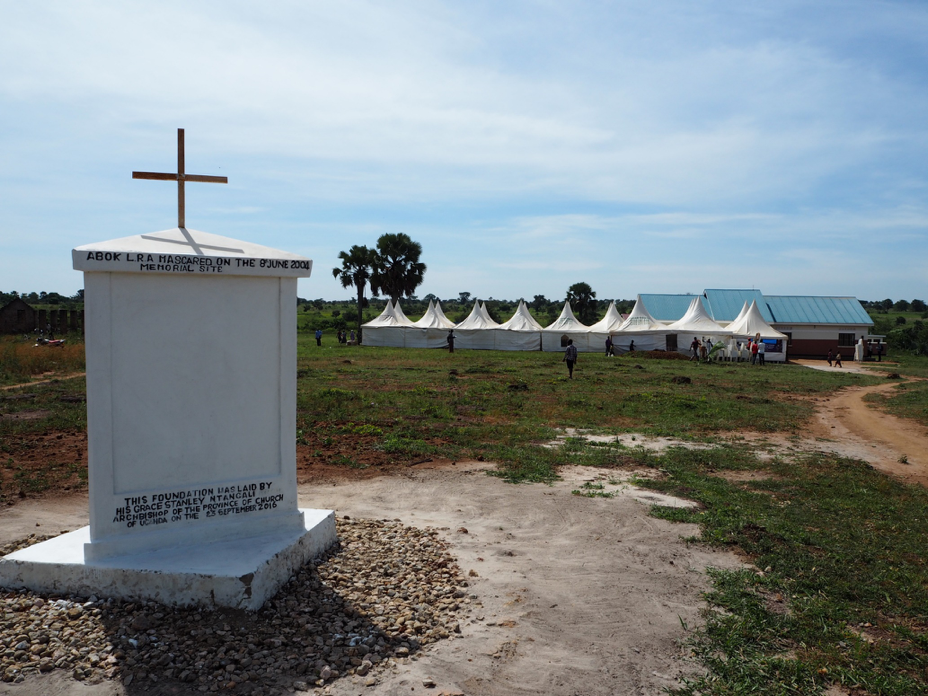 The massacre memorial in Abok, Northern Uganda. In the background: the tents for the public screening of the Ongwen trial (image: Jonas Bens).

Among public relations people, there is one prevalent metaphor for the press: “the Beast.” This is because every day and all the time it demands food: sometimes it happens that it eats a person alive. The Beast has its own laws and customs and they may seem strange to the uninitiated. One must be very careful with it. “The interested public”, on the other hand (if it is a good idea to speak about it as if it actually existed) is a very different animal. It also needs handling, but of another kind. The International Criminal Court (ICC) must tame them both. Sometimes, however, both feeding strategies are destined to clash. I believe, I observed such a clash in Northern Uganda on the 6th and 7th of December 2016.

I am in the country to do research on the role of affects and emotions in proceedings of the International Criminal Court – and how transcultural settings change the scene. To find out something about this, I am interested how the ongoing trial against Dominic Ongwen – once a high-ranking commander of the notorious Lord’s Resistance Army from Northern Uganda – which takes place in far-off The Hague is perceived in the very place where the massacres took place. (For some historical background see the box below.)

One opportunity to observe how people feel about the Ongwen case presents itself on 6 and 7 Dec. Then, the ICC is in session to open the trial against Dominic Ongwen. During these two days, the Office of the Prosecutor, the Representatives of the Victims and the Defence team give their opening presentations. The trial is then planned to continue in January 2017. As a measure of the ICC’s outreach activities, this two-day trial opening shall be screened publicly in Northern Uganda. I have decided to visit the public screenings in Abok, a village about 90 minutes away from Gulu in Northern Uganda. Abok was the location of an IDP-Camp during the height of the war and was massacred by Dominic Ongwen’s troops on 8 June 2004. I had visited the village previously with a colleague from Northern Uganda to have a conversation with the local massacre survivors’ association, and I am curious how they will carry out the screening. Additionally, I have heard that the Registrar, a high-ranking ICC official who is responsible for the administration of the Court (both the Outreach Unit and the Public Relations Unit belong to the Registry), is planning to visit the Abok screening. Media representatives are also expected.

When I arrive with two colleagues from Northern Uganda, we see two large tents and plastic chairs for about 2.500 to 3.000 people. And after a while so many people have arrived that there are not enough chairs for all. Only two very small television screens are put up in both tents to watch the proceedings. Instead of life-streaming directly from the feed produced in The Hague the organizers have switched on NTV, the Ugandan news channel. The television broadcaster screens the proceedings in English – but frequently interrupted by news readings. While the 70 counts of crimes against Ongwen are read out, the Registrar, some ICC personnel and embedded journalists arrive in a caravan of several white SUVs. People are watching the images, but very clear majority of the visitors do not understand sufficient English to follow a proceeding as technical as this. 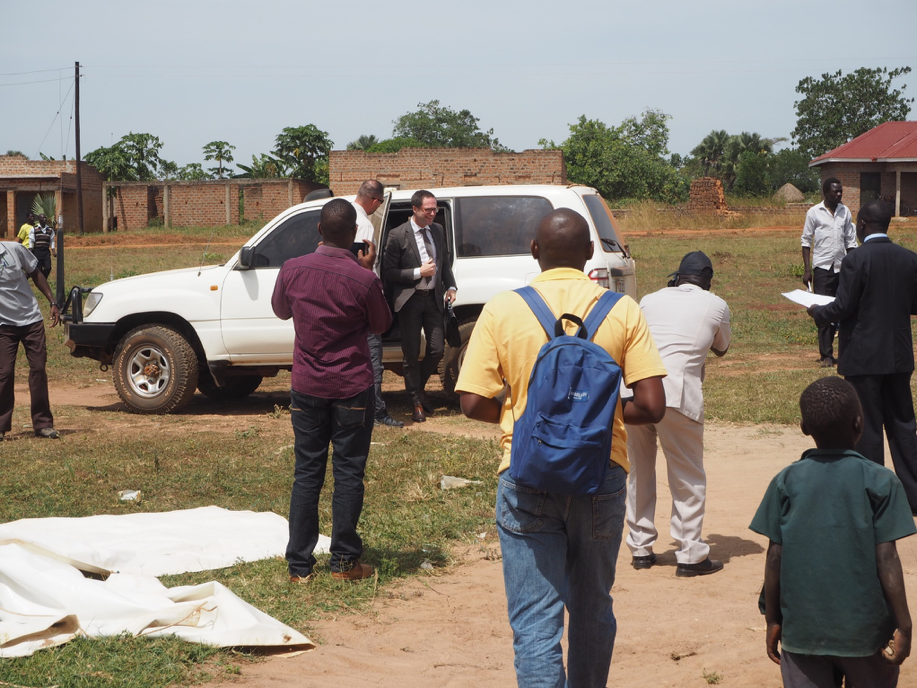 After the Registrar has arrived, there are speeches and a question and answer session. The Registrar declares that in his 15 years working for the ICC he had never seen anything of this magnitude regarding community engagement in a proceeding. A translation is made, people clap. A community representative praises the ICC’s work in the friendliest language. After this introduction, he asks the Registrar why they do not have an office in nearby Gulu, but only in far-away Kampala; and how they will solve the problem that not all members of the community eligible for formal victim’s representation had the opportunity to sign the necessary form before the deadline expired. The Registrar replies most friendly, but says that he has no authority to promise anything on these matters.

During the Q&A, Dominic Ongwen, the accused, makes his statement in the courtroom. Although he speaks Acholi, NTV only screens the English translation. Just a few people are following. The LRA had committed heinous crimes, Ongwen concedes, but referring to his abduction as a child in the 1990s, he says: “I am not the LRA”. Only a minority of community members is able to follow this important moment in the proceeding. In the meantime, the camera teams for the television channels make their shots. What they show is a huge crowd gathering before small screens. 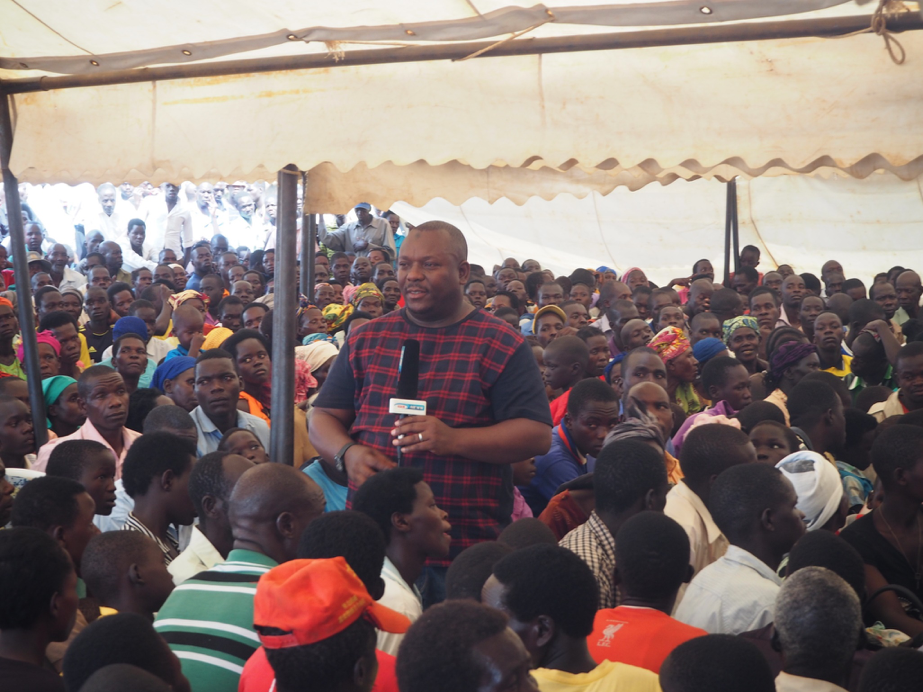 A TV journalist reports from the crowd in Abok (image: Jonas Bens).

A lively woman, apparently a member of the ICC’s public relations team, approaches me as soon as the Registrar prepares to leave the scene. She stretches out her hand to greet me with the words “aren’t you impressed?”. I agree that the number of people who came to the site was impressive. “It’s huge, isn’t it?”, she strengthens the message. If I were with AFP [the French news agency], she wants to know. When I reply that I am not a journalist, the conversation ends abruptly. In seconds, she has vanished in one of the white SUVs. The caravan leaves. The Registrar still has a radio talk show to work through: The Beast is never satisfied.

After the Registrar has left, NTV does not screen much more of the proceeding, and people become bored staring at always the same image of a Prosecutor presenting evidence. Long before the end of the court day in The Hague it becomes clear that NTV will not broadcast any longer for today. People leave in the hundreds. Some men begin loading hundreds of white plastic chairs onto a truck. 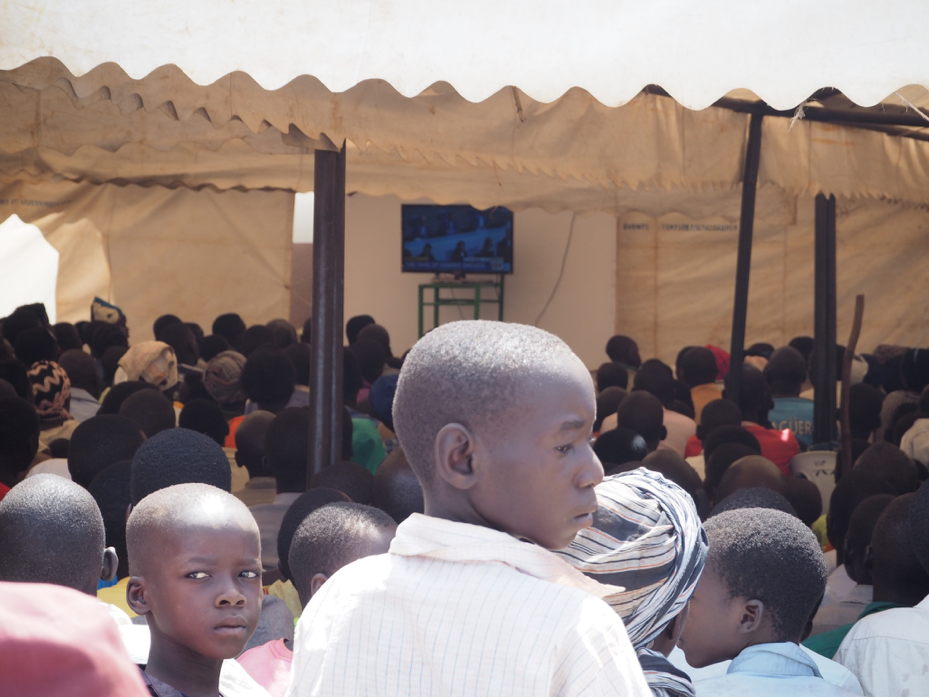 People are watching the images from the opening of the Dominic Ongwen trial in Abok (image: Jonas Bens).

When we arrive in Abok one day later, we are in for a surprise. The tents before the administrative buildings have vanished. There is nobody to be seen. When we ask an official who works in the building he directs us to a small community centre down the road. Today, the second day of the trial opening shall be screened there. On arrival we realize the place is a small courtyard with benches, maybe some 40 people are seated already, watching NTV. A telenovela from Latin America is on – English dubbing. An enchanting white woman tries to seduce a dashing white businessman into her evil plots. The attempt fails. Nobody of the ICC is to be seen. 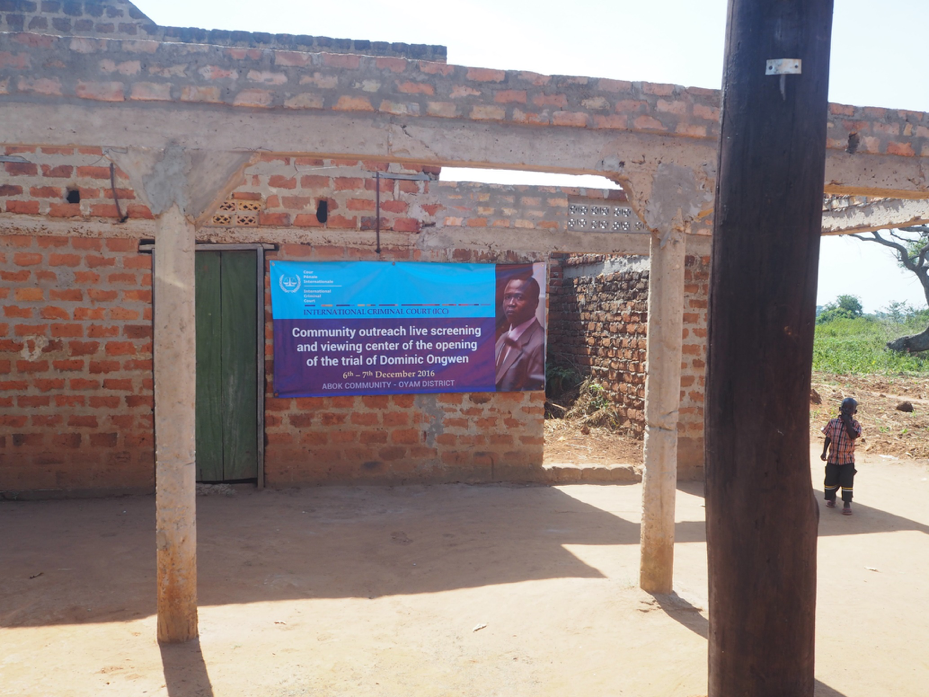 Outside the public screening centre on 7 Dec (image: Jonas Bens).

On this day, NTV screens a little more of the trial opening than the day before. With only one hour delay, the submission by the Office of the Prosecutor is broadcasted in part. The smaller room is equipped with photocopied “Case Information Sheets” translated into Acholi. They contain basic information about the case and the participants and are also available in The Hague – there in English and French. Instead of using NTV’s English audio feed, the organizers have tuned in MegaFM, the Acholi speaking radio station. Over radio the Acholi translation of the proceedings are transmitted. They get the feed directly from The Hague – the trial is translated into Acholi for Dominic Ongwen anyway. The hall fills to up with about 250 people, about 10 per cent of yesterday’s number. The atmosphere is staggeringly different: people are calm and serious, the mood is tense, most visitors seem to be following attentively. During these times, most people seem to understand what is going on. 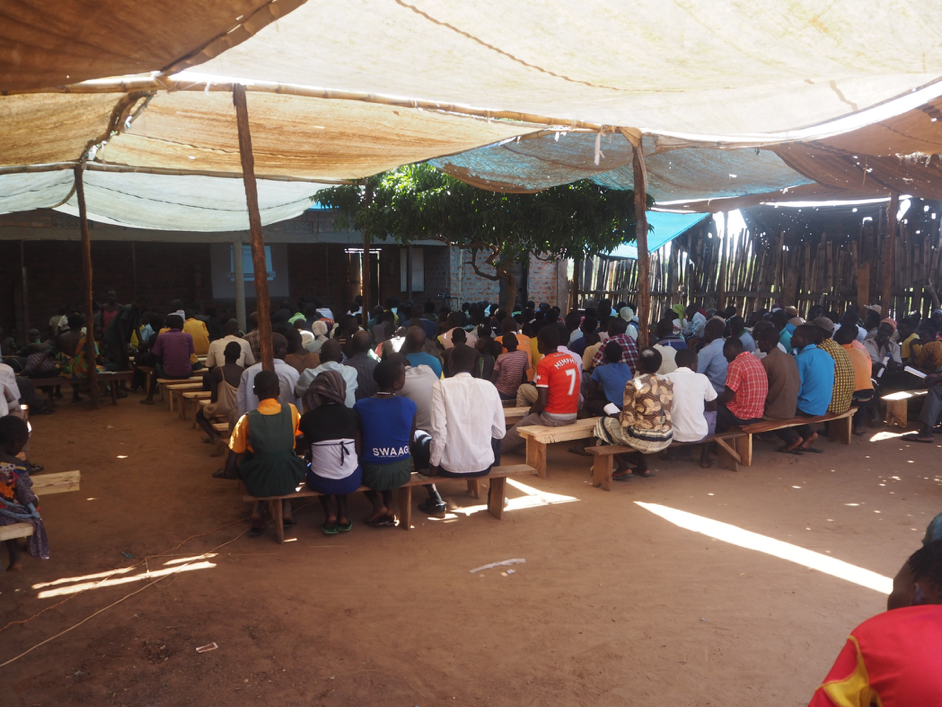 The public screening of the Dominic Ongwen trial in Abok on 7 Dec (image: Jonas Bens).

At this day, however, no ICC official will come to Abok. There is some confusion when things will be broadcasted on NTV, or what time it is in The Hague. NTV again broadcasts only parts of today’s proceeding. When the Defence team is due to speak, the news channel is starting to show music videos. The community representative who had spoken yesterday during the Registrar’s visit complains: “I’m on my own here, I hear nothing from Gulu.” While he says these words, “the Beast” has already left town.

A Short History of the Conflict in Northern Uganda

From the mid-1980s on, when the current president of Uganda, Yoweri Museveni, came off victorious from a bloody civil war, several insurgency groups from Northern Uganda rebelled against the new government from the south. In the 1990s, the Lord’s Resistance Army (LRA) under the leadership of Joseph Kony was the only relevant rebel force remaining. Having lost a lot of its early public support they resorted to abduct children to conscript them into their ranks and especially young women and girls to distribute them as forced wives and sex slaves among the LRA fighters. In the late 1990s and early 2000s Northern Sudan began arming the LRA with the hope that the Northern Ugandan rebels might not only keep in check the Ugandan government but also the separatist rebels in South Sudan. After 11 September 2001, the United States’ government, suspicious about the Muslim regime in Khartoum, began to support the Museveni government in Kampala against the LRA.

In the early 2000s the conflict reached its high-point. Nearly 90% of the population of Northern Uganda were forced to live in internally displaced persons (IDP) camps which were poorly defended by the Ugandan army and regularly looted and massacred by the LRA. For four of those massacres, among other counts such as the conscription of child soldiers and sexual slavery, Dominic Ongwen must stand trial in The Hague. It is estimated that during the conflict over 30.000 children have been abducted, and at least 60.000 people lost their life.

After Southern Sudan became independent in 2005, the regime in Khartoum drastically reduced their support for the LRA and Kony was forced into peace talks with the Museveni government in 2006–carried out in South Sudan. The “Juba Peace Talks” eventually failed to bring an accord, because Joseph Kony decided not to sign the deal in the end. But since that time the LRA was not able to carry out activities in Northern Uganda. The group still exists, though reduced in size, and carries out attacks mainly in the Democratic Republic of Congo, and the Central African Republic.