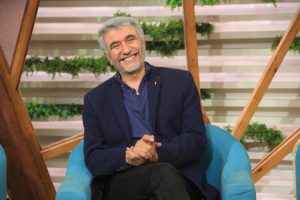 The interview series poses questions concerning the role of affects and emotions in research practice and contemporary society to researchers on short-term visit and associate members of the Collaborative Research Center “Affective Societies”. Today, we introduce Nabil El Kot who is a Consultant Psychiatrist with 28 years of work experience in the field of psychiatric disorders, providing services to both inpatient and outpatient mental health clients. He has special work experience with HIV/ AIDS clients and related groups (directly, as trainer and supervisor) and has worked with LGBT communities. His work extends to people living in conflict areas. He is a board member in the Evolutionary Psychiatric Association and the Egyptian Association of Group Therapies.

How to maintain hope?

For years my main concern has been how to maintain hope, sense of humor and a feeling of collective destiny. The harsh conditions in the Middle East, political and economic instability along with civil and regional wars add new burdens to the already existing problems such as poverty and epidemic conflicts. As a psychiatrist I am focusing not only on the individual level but also on the collective level where my above concerns are alive.  The importance of this question stems from my deep fear for the future of my community and its possible collapse. Although this question is a local one, it also matters on a global levels. I believe that the most important question in this era is how to maintain societies from disintegration and individuals from frustration and despair. Through ceasing conflict and enhancing a sense of collective destiny, we can   protect societies from collapsing and make this hope real, which is of utmost importance to me.

Yes, enjoyment and having fun. In my local community when people get upset they tend to enjoy different types of food and even sing and dance collectively. When they are in conflict with each other, they gather around over food to ease their conflicts. In happy occasions, they have fun through eating, singing and dancing. Joy and fun are the most confusing and surprising emotions because they are pan-conditions and not restricted to specific situations contrary to other emotions like anger, sadness and fear, which are usually situational and occasional . Joy and fun continue to be present, and even flourishing during tough times like disasters. I think they are survival mechanisms that individuals and communities use to face dangers and heighten resilience during tough times. That is why I consider them essential emotions, and very important to survive precarious situations to preserve life and enhance resilience and well-being. The intensity and prevalence of these emotions vary among communities and individuals according to multiple variables. I think that any kind of support should include these emotions along with other help services.

3. Do you perceive any affective driving force or affective barrier concerning your research work? Can you think of an emotion whose relevance has recently surprised you?

The most important research driving emotions are feelings of curiosity, excitement, diversity, and enjoyment. I consider them benign change driving emotions, in contrast to the violent ones like anger, fear and frustration. Benign change driving emotions can get their effect in circular or spiral patterns of subtle changes individually and collectively, which disturb dictatorships and oppressive regimes. While these regimes try to put obstacles and inhibit these emotions, at the same time they foster monotonous emotions like boredom, similarity, homogeneity, conservatism, fundamentalism, fearfulness, conspiracy and fear of change. They are using these emotions to hinder the process of change, whether it is subtle or harsh and keep the system stable. To produce these results, they are practicing speech and expression constraints, intellectual and political oppression through prohibiting movies, confiscation of books, putting writers, artists and creative people in jail or exiling them and enacting a media siege. In this atmosphere of monotony and boredom, one cannot think of conducting research successfully.

The Woman who Lived in the House Before Me, a poem by Syrian writer Rasha Omran. Rasha moved to Cairo, Egypt when the Syrian revolution turned into the worst civil war in the region. Her book portraits a single woman who has been, in her fifties, obliged to live away from her home, family and friends. I consider this book an exercise of recovery from a trauma which chattered the self and turned it into tiny fragments. Her recovery process takes the form of digging into the psyche to find out realistic and imaginary bases to start again in the new home.  It also includes embracing, not only the present of the new place, but its past as well, by imagining generations of women who may have passed the same path and inhabited the same place and felt the same sorrow and happiness of the present. It is also a detailed description of a healing process from different types of losses and traumas; not like an ordinary healing which is how to get rid of pain and tension emotions but a recovery that is finding out our deep strengths and revive the deep essence of life by embracing hundreds of compelling and strong contradictory emotions.

Anger. Now, there is a lot of anger in the air, we are faced with too much anger which mostly turns into violence every day and everywhere. I can smell it around. If we need to cease anger and violence, we should find out new peaceful channels to transform the despair and hopelessness that are behind most anger states, into solidarity, humor and research work. Some authors think that this emotion could be a constructive one (constructive anger) in specific ways and only if guided. But after all these wars and terrorist attacks during the last few years I can say anger is a bad emotion, nothing good comes out of it.