“I can tell you that. But nobody else talks about what happened.”

Using a psychological anthropological approach to silence, this essay demonstrates how silence may be an affective action in people’s efforts of navigating diverging emotion repertoires. Elsewhere, my colleagues and I have argued that emotion repertoires are shaped during discursive, practice-based, and embodied processes of socialization and that they enable individuals and collectives to decode and interpret felt experiences as discrete emotions, to communicate durable meanings out of a number of possibilities and to perform actions in intelligible ways (von Poser et al. 2019). Thus, I address the practice of silence as part of an emotion repertoire that unfolds relationally. My interlocutors acquired silence as a nonverbal element of communication in Vietnam. In the course of migration, the practice became fragile.

The data that I present was gained during a person-centered ethnographic study in and outside of a psychiatric outpatient clinic for Vietnamese-speaking patients in Berlin (Heyken et al. 2019). My interlocutors are connected by their experiences of war, discrimination, loss, and displacement. They have been suffering from discontinuities between times and spaces as well as between well-being and illness. Over time, tensions increased as my interlocutors felt the urge to conceal health problems. That urge relates to a shared emotion repertoire that is influenced by the Confucian ideal of social harmony. My encounters with one of the patients, Mr. N, offer an example of the difficulties of navigating silence in this setting.

In early 2016, I met Mr. N, a man in his mid-sixties, in the outpatient clinic and learned that he was troubled by intense feelings of pressure and distress. For many years, he had silenced his difficulties as a way of saving his face and to spare his family from harm. Eventually, his strategy of concealment culminated into increased affective dissonances and depressive symptoms. At the beginning of our regular encounters, he would often focus on situations of despair. He talked about feelings of pressure in combination with recurrent flashbacks and nightmares in which burdening episodes from the past and the present merged. In terms of embodied memories, he explained that minimal sensations, like a smell or a sound, could easily evoke horrific scenes and images he had seen and lived through. Getting dragged into a destructive spiral of thoughts, his heart would start to race and his body posture would turn tense. He could not regulate his bodily “felt intensities” (Röttger-Rössler 2016: 6). Instead, he tried to conceal his affects by patriarchal seniority. During our conversations, he emphasized that he talked only to experts about his condition, whereas he remained silent in front of his family and peers. For years, he withdrew socially and this aggravated his mental condition. I asked him to go on outdoor walks with me and it turned out that these walks helped Mr. N to decrease the intensity of his feelings. 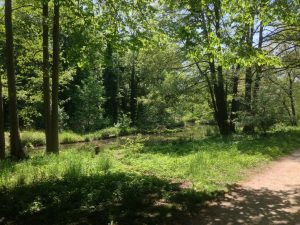 Walking in a park during a go-along (c) Edda Heyken

During our mobile encounters, I learned that silence had been a resource for Mr. N in numerous difficult situations in his past. Silence had empowered and protected him during and after the war in Vietnam. In conversations, he emphasized that “if you want to have a future, you have to forget the past. Keep silent and forget, because you cannot change it”. Thus, conceptualizing silence in terms of emotion management (Pascuzzi and Smorti 2017) hints to a habituated act or protective mechanism. Other interlocutors confirmed that in (post) war-time Vietnam silence appeared as a sociocultural strategy of regulating challenging emotions in challenging situations for the sake of collective social harmony. In other words, silence was part of Mr. N’s emotion repertoire that “inevitably unfolds within distinct spheres of affective resonance” (von Poser et al. 2019: 249). According to Confucian values he grew up with, the practice of silence relates individuals within the hierarchically structured Vietnamese society through tacit knowledge. Mr. N adhered to this strategy and would leave situations which made him turn tense or angry. Silence had helped him to build an emotional rigidity to cope with hardships. Mr. N remembered that feelings of insecurity accompany him as a result of his experiences of multiple arrests and living in a society of mistrust. In this context, he explained: “everyone mistrusted everyone after 1975. Nobody talked about what happened or how they were treated. If they did, they had a ‘car accident’ or ‘their food got poisoned’.” Silence became a form of protection in an uncertain environment.

After his escape from Vietnam, Mr. N continued to practice silence in Germany amongst other Vietnamese refugees. Feelings of estrangement accompanied his forced migration to Germany. The embodied reverberations of past experiences influenced Mr. N’s decision-making processes as well as his behavior patterns. However, silence now failed as a resource for regulating challenging emotions. He narrated situations in which he repeatedly felt mistreated. He remained silent but his increasing internal pressure challenged his regulation. Meanwhile, he saw others reacting vigorously in similar situations. In contrast to his experiences in Vietnam, Mr. N now interpreted his silence as a loss of face which intensified affective dissonances. Aggressive thoughts merged with horrific memories, distorting his perception. Silencing this distress, he said, intensified it even more.

Silence had proven practical when confronted with emotional hardships, imprisonment, persecution, and protected him from further assault. Mr. N. preferred to act silently in front of his family and peers whereas he talked abundantly in other relational encounters, for example with medical staff and during our ethnographic go-alongs (Kusenbach 2003). Natural environments relationally affected Mr. N and generated biographical narratives and memories of himself that had not been available to him for a long time: While walking through a narrow grove on a sunny afternoon, he remembered how he navigated through the jungle by relying on his senses and the altitude of the sun. This contrasted with his current perception of himself as he suffered from forgetfulness and a lack of concentration. His accounts made visible how the past becomes affectively reactivated through tacit embodied knowledge (Kidron 2009; 2011). Thus, silence not only demonstrates a sociocultural habitus but marks a durable but fragile affective action provoked by frictions. Silence as affective action bridges past and present through silenced but embodied memories. In Mr. N’s ambivalent perception of silence lies the crucial point: The durably applied strategy of silence proves relationally impractical and psychologically untenable.

With the provided ethnographic material, I want to highlight the complexities of silences and argue against a pathologizing take on silence. The anthropologist Robert Weller emphasized that “silence is opaque [and] defies easy interpretation (Weller 2017)”. Thus, we have to take a deeper look into graspable affective intensities which are implicitly tied to perceptions and modes of interaction. For Mr. N’s silence relates to a durable emotion repertoire that is constitutive of his self-perception. Through psychotherapeutic treatment, he is encouraged to flexibly reflect upon and to negotiate silence as part of navigating through diverging emotion repertoires.

Kidron, Carol A. 2011. ‘Sensorial Memory. Embodied Legacies of Genocide.’ in Frances E. Mascia-Lees (ed.), A Companion to the Anthropology of the Body and Embodiment (Blackwell Publishing: Malden u.a.).

Kidron, Carol A. . 2009. ‘Toward an Ethnography of Silence. The Lived Presence of the Past in the Everyday Life of Holocaust Trauma Survivors and Their Descendants in Israel’, Current Anthropology, 50: 5-27.

This post was originally published at the blog Anthropology of Silence.