Staging Spectators in Immersive Performances is a welcome addition to the growing body of scholarly work focusing on artworks and artistic practices that immerse audiences in intimate and/or large-scale environments, which often require participation from spectators and tend to be situated outside of traditional theatre institutions and spaces. The anthology comprises an introduction followed by three main thematic parts on ‘Mobile Audiences’, ‘Researching Spectatorship’ and ‘Questions of Power’. The introduction by Doris Kolesch sets the self-reflective tone of the anthology in relation to the concept of immersion, the recent popularity of which has rendered it rather ambiguous. While the ambition of the book is not to make reparations in this regard, several of the contributor’s reflect on the term, its definitions and its applicability as a conceptual framework for understanding contemporary theatre and performance, rather than naively presenting immersion as a radically new or transformative phenomenon. In line with recent publications by Gareth White, who is also a contributor to the book, Kolesch focuses on the relationality of immersion as experiential modality characterized by a fluidification of and oscillation across boundaries. Kolesch calls for research on immersion to attend to ‘the thresholds, passages and transitions between different surroundings, environments or even worlds’ (p. 4).

The emphasis on thresholds, boundaries and passages is reflected in many of the anthology’s chapters. Consequently, most of the contributors take a different approach to the politics of participation in immersive performances than much previous research on the topic. While contributions by Kolesch, Lisbeth Groot Nibbelink, Janelle Renielt, Jen Harvie and Theresa Schütz all engage with Adam Alston’s argument that some forms of immersive theatre take form as experience-machines creating neoliberal subjectivity, these contributions also highlight how participation in immersive performances can be politically ‘productive’ in other ways. Reading through the book, immersive participation appears not as unreflective absorption, but rather as the interruption of complete aesthetic illusion. Immersion requires moments of rupture and distance in a relational dynamic of submerging and surfacing that makes the participant conscious of their specific point of observation. Framing immersive participation as oscillation between first and second order reflexivity is one of the strengths of the book as it opens up avenues for discussing the (body)politics of immersion in a nuanced way, where the political valence of participation is judged on a case-to-case basis.

One of the anthology’s most significant contributions to knowledge on immersive theatre and performance is the chapters that focus on immersion from a dramaturgical perspective. Conceptual frameworks for analysing dramaturgical strategies of staging spatial arrangements and performer-participant constellations have been rather underdeveloped in research on immersive theatre so far. As contributor Lisbeth Groot Nibbelink notes; ‘Since immersive works often draw on individual trajectories and/or personal experience, descriptions of such works (…) tend to focus on personal experience instead of their dramaturgy’ (p. 64). Barbara Gronau, Benjamin Wihstutz and Nibbelink show how a spatial perspective can offer useful concepts for the exploration of immersive dramaturgies. By framing immersive theatre as a ‘theatre of situations’ Wihstutz marks an important analytical difference between immersion as arrangement and immersion as event – between a performance’s potentialities for immersive relations and their actualization for the individual spectator. Nibbelink suggests a Deleuzian concept of ‘nomadic theatre’ as a way to conceptualise the constant re- and deterritorialisations of such immersive arrangements and their relational constellations between spectators, performers and space. It seems to me that framing spectatorship in this way as processes of becoming within dramaturgical compositions allows for precise investigations into the relationship between immersive arrangements and immersive events as well as a nuanced approach to the politics of participation in immersive theatre more generally.

Apart from the dramaturgical perspective on immersive theatre, the first section also provides a much needed art historical perspective on the concept. As Kolesch notes in the introduction, immersion is not a new phenomenon in art and society, and the contextualisation of immersive theatre in relation to other historical and contemporary practices of immersion therefore deserves much more attention within the field. Gronau explores immersive theatre’s relation to avant-gardist and neo-avant-gardist art historical experiments with panoramas and traces a lineage from early 20th century art forms up to contemporary performance installations. Kerstin Schankweiler approaches the historical contextualisation from a theoretical perspective and connects research on immersive theatre to a wider art historical tradition of researching reception aesthetics. As several of the chapters highlight how immersive performances often blur the lines between art forms, these explorations of practices and dramaturgies of immersion beyond theatre manage to productively relativize and discuss the novelty of immersion and our fascination with it.

The second part on ‘Researching Spectatorship’ contrasts the dramaturgical-spatial perspective in the first part, as the chapters explore the methodological implications of researching spectator experiences in immersive performances. The contributions highlight the possibilities and potentials for merging qualitative methodologies from art disciplines with more anthropologically and sociologically inspired research methods such as audience interviews, as suggested by Janelle Reinelt, or sound recordings of audience reactions during performances, as explored by Stefanie Husel. While there is no question that valuable insights can be gained from empirical audience research, the chapter by Reinelt at times takes on a rather empiricist tone. In response to Alston’s explorations of immersive theatre in the context of neoliberalism, Reinelt labels his approach ‘speculative’ since we cannot know whether audiences actually identify with a neoliberal paradigm or experience the affects identified by Alston without asking them. It might not be productive to equate the political, artistic or cultural value of immersive theatre to the value that individual spectators attribute to it, or, as Antje Kahl notes in her chapter, to assume that quantitative data necessarily produces ‘real evidence’. While Reinelt clearly demonstrates the utility of empirical audience research for qualifying discussions on immersive performance as event, the chapters in the book’s first part demonstrate the possibilities for studying the staging strategies and political contexts of immersive performance as dramaturgical arrangement in ways that go beyond theoretical speculation. By mainly focusing on what happens ‘after the fact’ of immersive performances, or as Mathew Reason puts it, on what audiences do to performances rather than what performances do to audiences, the chapters by Reinelt, Reason and Kahl demonstrate that the transformative process of much participatory theatre is less instantaneous and more accumulative than what is usually assumed. This is fitting with the relational thread of the anthology’s focus on immersion as dependent on distance and critical reflection – even after the performance ends.

The third part on ‘Questions of Power’ continues this line of thinking and challenges the idealised conception of audience participation as inherently democratic in different ways. The chapters by Jen Harvie, Theresa Schütz and Rainer Mühlhoff all thematise the ability of immersive performances to produce complicity and distribute guilt to participants, which Gareth White frames as producing ‘problematic affective communities’. In between the anthology’s chapters, the editor’s have inserted drawings from the conference on staging spectators in immersive performances that the book is the result of. The drawings playfully and self-reflectively give voice to some of the dilemmas, thoughts and experiences that engaging with immersive performances as both participant and scholar gives rise to. The chapters in the final section neatly contextualize the drawings by focusing on participation as unpleasant, apprehensive and recalcitrant. The section thus provides the reader with perspectives on the ‘bad feelings’ of immersion; not only the ones that emerge from participation in specific structures of feeling within the work, but also the ones that emerge from the oscillation between the first-order participation in the work and the second-order reflection on the work. The chapters thus engage with ongoing debates about immersion as not just artistic practice or a particular aesthetic, but also as societal dispositif and cultural force.

In addition to the different theoretical and analytical chapters, each part contains an interview, conducted by Theresa Schütz, with three of the artists whose works are discussed in the book: Signa Köstler, Julian Hetzel and Mona El Gammal. Including the artist’s perspective on their own practice provides a very informative addition to the usual anthology format, and gives the reader useful insights into how the artists themselves articulate their own strategies of staging spectators. As the majority of recent academic investigations into immersive theatre has been carried out within a UK context the chapters and interviews contribute to the field with a more continental perspective, which is reflected in both the list of contributors and the variety of the art works and artists that they engage with such as Julian Hetzel, Thomas Bellinck and Dries Verhoeven. The Copenhagen based artistic collective SIGNA especially provides a common frame of reference for many of the contributions giving the relatively diverse chapters a common point of coherence.

Different theoretical, disciplinary and artistic ways of observing immersion co-exist and co-evolve within the book. By including a number of diverse perspectives from both scholars, artists, artistic contexts and disciplinary fields the anthology manages to provide new insights into the phenomenon of immersion while also critically reflecting the problems of the term as analytical and theoretical concept. By including reflections on both distanced and ludic modes of participation the anthology as a whole foregrounds the paradoxes inherent in both the staging of and participation in immersion as characterized by the simultaneous demands for illusionism and participation. With its focus on spectatorship, the anthology also manages to engage debates that have evolved within the ‘spectatorial turn’ in theatre studies more generally. However, the broad scope of the book also means that not all of the chapters actually draw on examples that would be considered typical for immersive theatre and performance. For some readers, who are primarily interested in the dramaturgy and staging strategies of immersive theatre, this might provide a point of frustration and for others, who are interested in spectatorship and participatory performance more generally, this will be the strength of the anthology. 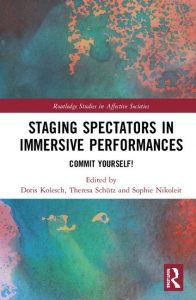 [:en]CRC-blog guest author Josefine Brink Siem is PhD-fellow at the department of Dramaturgy and Musicology at Aarhus University, Denmark. Her PhD-project is focused on developing and qualifying concepts for analysing the affective dramaturgies of artworks in theatre, on television and on social media. She is also a member of the editorial board of the Danish dramaturgical journal Peripeti. Josefine took part at the CRC-Spring School "The Power of Immersion: Performance - Affect - Politics" in 2018 as well as in the workshop "Affects, Media, Migration and Practices" in 2019[:]