The interview series poses questions concerning the role of affects and emotions in research practice and contemporary society to researches on short-term visit and associate members of the Collaborative Research Center „Affective Societies“. Today, we introduce Greg Seigworth, who is Professor of Communication Studies in the Department of Communication and Theatre at Millersville University in Pennsylvania. 2010, he has co-published the widely received The Affect Theory Reader (with Melissa Gregg). Since 2017, together with Mathew Arthur he‘s co-editing Capacious. Journal for Emerging Affect Inquiry. 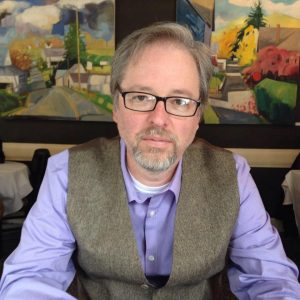 There are always too many and none! Whenever someone asks what I am currently working on, I usually just sorta stare off blankly into space. I guess that’s because my own research works at a continual low burble … provoked (to shivers of delight or horror) by the most minuscule events sometimes. Lately I have been thinking and writing a bit around the relation of affect and interface (of all sorts) and capitalist enterprise. But I am also quite captured by recent work, for example, on blackness and indigenous cultures in relation to affect studies – work that can trouble the contextual surety and apparent poise with which research questions regularly get posed. Because I try to resist any notion that affect studies should ever come to reproduce itself over and over again as an orthodoxy or as a readily deployable set of maneuvers, I tend to look to what I semi-jokingly refer to as affect studies’ “frenemies and haterz” for inspiration. Also I like the edges where disciplines get stretched and frayed (while not fully losing their shape) and where tried-and-true practices fall loosely but vibrantly into new patterns.

Because I teach and have been at the same institution (Millersville University) for 25 years, I have been rendered sensitive to even the most subtle changes in my students’ emotions and feelings. Except the changes are no longer so subtle. The precarity of their present lives and their near-term/long range futures (economically, ecologically, psychologically, socially, etc) – something that was an emergent structure of feeling just a few years ago – now seems, to me, to be much more ascendant, even dominant. When we discuss anxiety and depression in my classes, they speak from first-hand experience – most of my students are medicated or in counselling or both (and they are invariably surprised to find this out about each other because no one quite wants to talk about it until they do and then it’s a flood). And, although they are increasingly fragile and on edge in so many ways, they are also determined to perservere and find – what seems to them to be – practical, sometimes quasi-hopeful ways of living-on with reduced but clear-eyed expectations. There is a fair amount of well-earned anger, too. If my students seem resigned [it is a wary, not weary, resignation], there is also a simmering alertness to those kairotic moments when conditions could be tipped otherwise. They know that they are living in a fucked-up state of affairs, and given half-a-chance, I am convinced that today’s young folks are increasingly capable of snowballing their festering disaffection in very transformative, maybe even radical, ways. (The activated students from Parkland who’ve risen to prominence recently after the mass shooting at their high school are perhaps one example.)

Affectively, I constantly traverse a line strung between burbling enthusiasms and gnawing dissatisfactions/irritations. I might percolate slowly but such blissful prickings and prickly bugginess (dimly lit though they sometimes appear to be) are what cause me to persist in my existence (my low-budget version of the Spinozan conatus).

Kyla Schuller’s The Biopolitics of Feeling: Race, Sex, and Science in the Nineteenth Century (2017) is a remarkable book, and it has made me rethink some of my too-taken-for-granted & blinkered understandings of affect (every word Kyla writes on ‘impressibility’ in relation to affect is transformative). If you are working in affect studies right now, you should read it. I mean it – Right now!

The United States long ago cornered the world market on ‘righteous indignation.’ But, post-Trump election, matters have only grown worse. In America, it is hard not to be pulled into the orbit of tit-for-tat trolling and the rising incredulity– especially on traditional and social media – over the meta-narratives for what constitutes (and what shouldn’t constitute) legitimate news-worthiness or, even, everyday political conversation around the dinner table. Trump is the great despoiler. Everything and everyone he touches is lesser for it. Once Trump has reduced everything to his level – he wins (and it is all about winning, so much winning). It is hard not to give yourself over to the sheer pettiness of it all, to let loose the worst angels of our nature. Trump feeds off the impassioned energies of righteous indignation (from the political right and left) and the economies of attention [‘breaking news!’] that sustain these energies through various news-cyclings & media platform criss-crossings; when it threatens to dissipate, he gooses it all again with some harrumphing tweet-storm or headscratching policy or personnel shift.

If affect studies is, in part, concerned with shaping & creating critical practices in the visceral tunings of attention (and I think it is), then we have to find ways that we might tune responses to Trump and Trumpism away from the self-enclosing-screaming-into-the-void righteousness of all manner of indignities (and every day there are more and more). Such responses only end up, as Richard Grusin might say, ‘premediating’ Trump and his next maneuvers. ‘What if he does this?’ ‘Trump wouldn’t dare, would he?’ Etc. And then he does. Of course. Righteous indignation turns into self-fulfilling prophecy (we know what the present is because we have opened it already). Meanwhile, so much gets almost completely backgrounded – like the incredible teachers’ strikes that have transpired across several states recently but have received 1/100th of the attention that attends to the Stormy Daniels affair or the latest White House insider gossipy leak. But there is a different – often slower but no less urgent – tempo that lends itself to the necessity of capturing the something-going-on in the collectively embodied nature of labor solidarity or, for that matter, of steadily evolving climate calamities, of the everyday prosaics of transgender lives, of my students’ anxieties and depression in the face of mounting debt but having not yet turned 20, and so much more. Most of all, there is a ‘dignity’ of feeling that comes from feeling-together, an upswell – even if it so often arrives like a sinking feeling – of capacities and incapacities to do and undo (to be done and to become undone), to be found in such ‘backgrounded’ issues with their tempos & agglomerating postural adjustments that affect studies can pull into focus like no other mode of attentive analysis operating today.