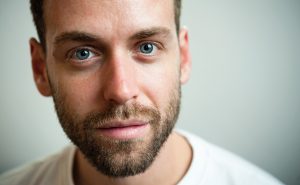 The interview series poses questions concerning the role of affects and emotions in research practice and contemporary society to researches on short-term visit and associate members of the Collaborative Research Center “Affective Societies”. Today, we introduce Mathew Arthur, who is design and web application Developer based in Vancouver. Together with Greg Seigworth he‘s co-editing Capacious. Journal for Emerging Affect Inquiry.

How to think and live out accountable equivocations between Western and non-Western and human and nonhuman world-making practices. In the always-aftermath of colonial and capitalist histories and amidst ecological ruin, that’s the big question. If I zoom in, it’s half about the politics of method as tethered to certain bodies and histories and half about cultivating better knowledge production tactics where “better” means enabling the endurance of non-Western and other-than-human modes of existence. I want to follow around what is being done—what capacities are enabled or inhibited—when this or that modality or this or that history or set of relations is being animated in academic and everyday practices. Off topic perhaps, I’m interested in what temporalities and sensibilities of encounter can be cultivated in making lacto-fermented foods (like kimchi or sauerkraut) and what politics arise in thinking though commonplace regenerative practices like composting.

Not surprised, but deeply felt: a complex of emotions and other physiological processes that fly together under the name “anxiety.” Anxiety seems a common response to an increasingly precarious world. To be anxious is to feel too much “inside” one’s own body–but also to be vulnerable to the world seeping in, to be vulnerable to catastrophic futures, to economies of care, to microbial and other nonhuman life, to industrial toxicities, to individualist or holistic health narratives, to the authorities of mainstream science, and so on. Anxiety is racing thoughts but also a palpitating heart, and it wipes out whatever line we have imagined between mind and body. Anxiety is (maybe) the body’s response to capitalist temporalities and material realities, but it is also out of sync–either too fast or too sluggish, overworked or weighed down. Of course to be anxious is not pleasant, but I wonder what new ways of knowing it might provoke.

Barriers, yes. Both in terms of my own experience of being a body that is always under construction alongside a messy world and as a general atmosphere of helplessness in the face of precarity and ruin that wants to do away with discomfort. Let’s say that it is something like the opposite of what Haraway calls “staying with the trouble,” reactions to being under capitalist or climactic pressure that fall into impasse on the one hand and utopic-scientific solutions on the other. Of course dystopias and utopias are speculative—but they are also worlds that bodies inhabit and deeply feel. Even when bodies sit down to read or write.

Alexis Shotwell’s Against Purity: Living Ethically in Compromised Times (2016). First, because it so artfully weaves together science studies/STS and Indigenous ways of knowing in unravelling the coloniality of purity practices across natural and social sciences but also in self-care and eating practices like yoga or veganism. Where I live in Vancouver, everyone is paleo or raw food or gluten-free and doing crossfit or mindfullness meditation. And, it’s so easy to see how these practices have been coopted into capitalist-individualist atmospheres of productivity even as they echo with alternative and non-Western worlds. I want to learn more about thinking health relationally.

Anxiety. But maybe there is no feeling “normal” these days (or ever). I think we need something more active, more activist, like lamentation or mourning–to rage against the violence done to human and nonhuman bodies. I would also like to do away with sentiments of propriety or keeping calm. Now is a good time to be angry or hysterical.